A visit to Sensōji at night is to witness Tokyo’s oldest and most celebrated temple in the kind of grandeur that just can’t be matched during the day. Beautifully lit and devoid of the daytime crowds, Sensōji at night offers an experience that is by turns magical, moody and almost authentic “shitamachi.” Buddhist temple Sensōji (浅草寺) is undoubtedly at the center of Asakusa’s gloat. Tokyo’s oldest temple regularly tops lists of the best sights in the Japan capital, if not the entire country. Perhaps it’s quite right to. Sensōji and the complex of sub-shrines, gardens and pagodas within which it resides is a stunning achievement in architectural terms, in aesthetic terms. It’s also the center of community, to some extent -- this is still a working place of worship after all (something easily forgotten) and is the focal point for one of Tokyo’s most impassioned and rowdy traditional festivals, the Sanja Matsuri.

While it may be old (parts of the Sensōji complex date back to 645) this grand old dame of Tokyo’s shrine and temple itineraries is showing no signs of slowing down. Sure there’s wear and tear but the experts come in to patch her up every now and then, leaving her looking as good as new. (At the time of writing Sensōji was undergoing no repair / reconstruction work.)

And she needs to be looking her best for as much as Sensōji may still be going strong, so too are the numbers of visitors feverish about seeing her.

Perhaps you visited Sensōji in years past. Perhaps you’re thinking about doing so for the first time and have an image of something serene, befitting of a Buddhist temple. Bin it. The philosophy may be one of shedding excess, but the brutal reality is that it seems to have gotten lost on those who stand to make money from the popularity of Sensōji. Business is booming.

Maybe that’s unfair. The popularity of Sensōji may simply be a reflection of the annual, record-breaking tourist numbers that are pouring into Japan as the country increases services to welcome them ahead of the Tokyo 2020 Olympics. Understandably, a lot of them are coming to Sensōji.

Nakamise, the souvenir shopping street that takes visitors from Kaminarimon (Thunder Gate) through to Hōzō-mon (the gate immediately in front of Sensōji’s main hall), these days seems to be dealing with crowds on a quite Biblical scale. Getting a clear shot of Kaminarimon is impossible and, despite the size of the complex, any quiet corners for contemplation seem reserved for those with permission to enter the temple interiors.

But all is not lost. Daytime visitors to Sensōji are missing out on the real magic, viewing the temple and its grounds in the evening and at night.

At around 18:00 the stores that line Nakamise are closing up shop for the day to reveal their ornately decorated shutters -- a scene in and of itself. The main hall of Sensōji closes at 17:00. However, the grounds of Sensōji are open all day and are beautifully lit until 23:00.

The crowds disappear too leaving the late visitor free to explore and stand in awe at will. This is when it all makes sense.

Kaminarimon appears in its full and thunderous glory, flanked by its gods of wind and thunder. Now you can see all the way from the gate through to the Main Hall and wander down Nakamise snapping away at the decorative shutters of the closed stores. The tourist tack seems a world away. As if an evening-lit Kaminarimon wasn’t impressive enough, Hōzō-mon, at the northern end of Nakamise, provides an even more dramatic scene, guarding the court in front of the Hondoō, the main hall of Sensōji. 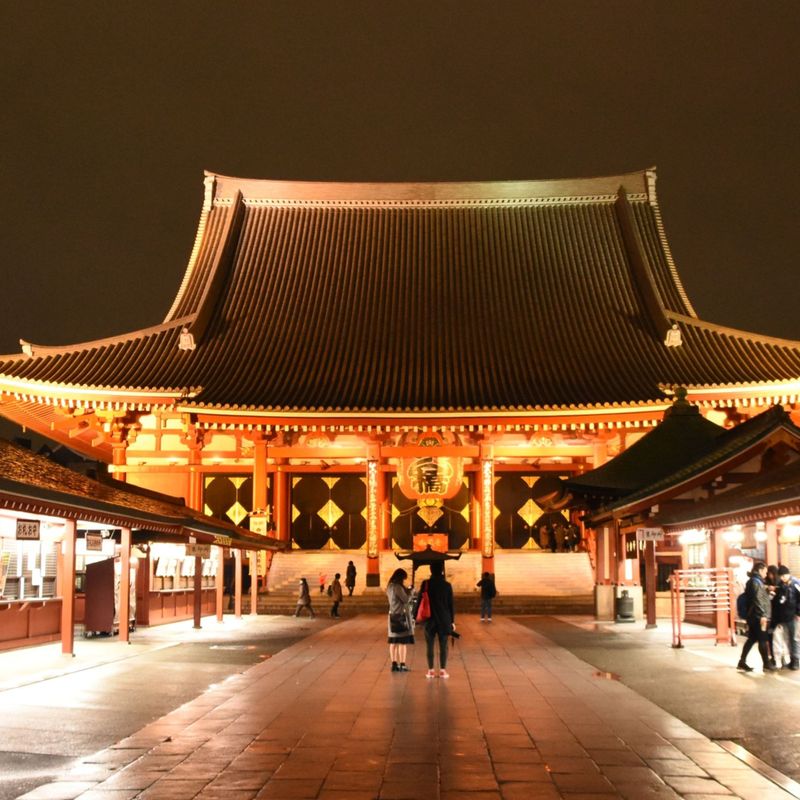 In the evening you’ll have the chance to witness locals climbing the steps to the main hall to offer a quiet prayer after work. It’s in this courtyard area, flanked by the hall, Hōzō-mon, the ornate hand-washer, and the Five Story Pagoda (the second-highest pagoda in Japan), that you can get the best sense of the grandeur of Sensōji, something which might be missing during the busy daylight hours. A distant Tokyo Skytree offers a stark space-age contrast. Asakusa-jinja (Asakusa Shrine) is located to the east of the main hall and offers an even quieter area for contemplation. The Shinto shrine is cloaked in a moody darkness come the evening which complements the shrine’s deep red paint work on a current structure that dates back to 1649.

West of the main hall, take time to wander around an area of gardens (with bridges and water features) which houses a number of smaller shrines and temples. One of the gods enshrined in this area is Daikokuten (大黒天), a god of darkness, which seems appropriate for the time of day.

The joys of visiting Sensōji at night are not limited to the temple grounds. Streets around the temple take on an entirely new guise once they become lit with the faux-old street lamps. Gone is the daytime feel of being in a recreation theme park, replaced by a sense of authenticity, old-world magic, and a touch of romance.

Particularly attractive is the street that loops around the southern and western edges of the temple grounds. While most businesses will be closed at this time, this keeps the street quiet and also reveals the beautiful shutters that guard the shops and stores, depicting colorful scenes of old entertainers. Around the western edge of the Sensōji grounds Hoppy Dori is lined with a number of robust izakaya that could make for an atmosphere place to grab a bite to eat. The street is particularly pleasant during the warmer months when temperatures are comfortable enough to enjoy sitting streetside.

The evening-lit, shitamachi atmosphere spreads throughout the streets that stretch south and southwest of the temple until they are intercepted by the main thoroughfares of Kaminarimon Dori and Kokusai Dori respectively.

For the starkest of contrasts to the Sensōji night viewing experience be sure to get an eye full of the popular chain store Don Quijote. The Asakusa branch is lit up like a Las Vegas casino!

Notes of visiting Sensōji at night

The best time to visit Sensōji is after around 19:00. This will have given the shops of Nakamise time to shut and the daytime tourists to clear out.

The temple and grounds remain illuminated until 23:00, although the grounds are open 24 hours a day.

Aside form the izakaya of Hoppy Dori, most of the restaurants in the immediate vicinity of the temple grounds will have closed by this time. The further away from the temple, the more eating options become available. Kaminarimon Dori and Kokusai Dori offer a mix of dining that is both authentic and of the fast-food / chain operation variety. There are toilets and drink vending machines in the temple grounds.

The atmosphere of Sensōji at night really is magical. While visitor numbers thin out dramatically, there will still be enough people around so as not to feel uncomfortable. That said, there are some dark corners at this time so it pays to be vigilant. After 23:00 it is probably best not to come here alone.

Bear in mind that most of Tokyo’s train and metro services will have stopped running by around 00:30